You are here: Home / News

The Barony Pop-up charity shop is our biggest fundraising event of the year and will be open for business again in March 2019. For 5 days we will be trading at 71 La Porte Precinct, Grangemouth selling lots of generous donations from our supporters.

This is always a fun week for our volunteers – hard work but very rewarding.

You can help in a few ways:

The Barony Players’ Spring 2019 production will be ‘Hobson’s Choice’, a Lancashire Comedy by Harold Brighouse directed by Tom Keeble. It is set in Salford, Lancashire in 1880 and is a focused, comedic exploration of the changing status and expectations of women within late-Victorian society.

Prosperous Salford bootmaker Henry Hobson is a widower with three daughters. It’s 1880, change is in the air and Hobson, a man who stands for middle-class Victorian values, doesn’t like it one bit when his daughters – who work unwaged for him in the shop and do all the housework – get what he calls “uppity”.

Younger daughters Vickey and Alice have beaus they would like to marry, but Hobson is too mean to give them the dowry they need, and he has no intention of letting his eldest daughter, Maggie, slip through his fingers. He might call her an “old maid”, but even the lightly sozzled Hobson knows she’s the real brains behind the business. But Maggie has other ideas for her future and they include bootmaker Willie Mossop, who may lack education and confidence but knows how to turn out a fine pair of boots fit for the carriage trade.

Auditions will be held on Sunday 6th January from 12 noon – 4pm.

There’s been lots happening at The Barony over the last year. Latest newsletter available to read. 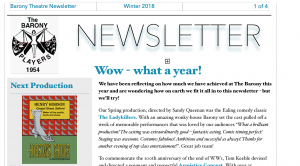 We are honoured and delighted to be chosen as a venue on the professional touring production of local Bo’ness playwright Sylvia Dow. This world premiere follows on from the success of the collaboration on Threads (2015), between award-winning director Muriel Romanes (The List, The Carousel, The Deliverance – Stellar Quines) and acclaimed writer Sylvia Dow (Thrawn Craws, Village Pub Theatre).

Please come and join us for what is sure to be a fine piece of home-grown Scottish theatre.

We are what we build around us

STUFF is about the hoarding of memories, emotions and things. Today the Council is coming to clear Magda’s house. She must find a way to deal with the constant shifting of stuff in her house and her head, as she revisits the past and struggles with the present to find a way to face the future. Told with humour and tenderness this will resonate in its view of our attachment to things, and our need for attachment to each other.

“Dow’s construction evokes the power behind a shared history as the ties that bind are stronger still.” The Herald on Threads, FOUR stars 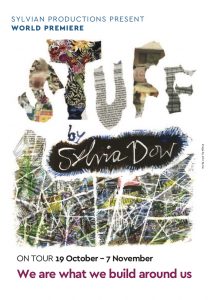 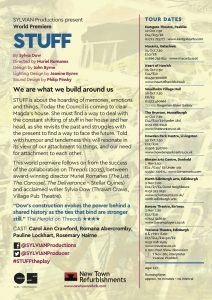 The Drama Club notices that their biggest rivals, the Cheerleaders, are acting unusual. They’re beginning to smell, and they seem to have an odd taste for human flesh… yup, they’ve turned into zombies. With the big Homecoming game approaching, Head Zombie-Cheerleader Peaches organizes her undead followers to plan a feast on the rest of the school. It’s up to the Drama Geeks to use their gift for dramatic flair to slay their rivals. Can a ragtag band of over-dramatic misfits defeat the zombies — and save the world — before it’s too late?

Come and join the Barony Youth Theatre in this fun production of Kathryn Walat’s Drama Geeks versus Zombie Cheerleaders this October.

BYT will follow this performance with a selection of scenes and performances to showcase their talents.

Tickets now on sale through the Barony Box Office.