Our winter production this year is going to be the hilarious Flint Street Nativity by Tim Firth (author of Neville’s Island). 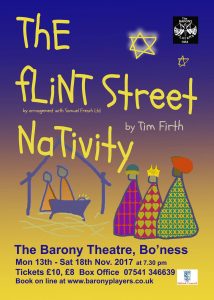 The eight-year-old pupils of Flint Street Primary School, all played by adults, perform the nativity play for their parents. The story is based on real events, collected over a period of ten years from members of Tim Firth’s family and friends who were teachers.

“Exposes what an ungodly snake pit of paediatric power-politics the staging of your average Nativity play can be… There are moments w
hen you may wet yourself laughing.”

Rehearsals so far have been so much fun – the script is brilliant and we can’t stop laughing.

Tickets on sale now though our Box Office. 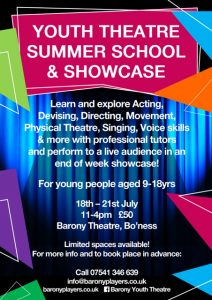 Our newsletter with details of everything that’s been going on at The Barony Players and The Barony Youth Theatre is attached.

Please do take a moment to read through it to find out what we’ve been up to over the past few months and what we have planned for the future.

There are lots of ways you can offer your help with the running of the theatre – so do please consider helping out; and pass the word round.

Our next Barony Players production is the comedy Ladies Day by Amanda Whittington. Life is one long, hard slog for the fish-filleting foursome Pearl, Jan, Shelley and Linda. But their fortunes are set to change when they head to Ladies Day at the races. Factory hairnets make way for fascinators as the four friends hit … continue reading.

10th & 11th September 2022 at 7:30pm David Hayman returns as everyman Bob Cunninghame. Bob is in a hospital bed. A long dark night of the soul, in an understaffed ward, a single room. Another stormy night. Rain and wind. He’s on the top floor of the hospital. The Death Star. He might be bed-bound, but … continue reading.

We are excited to welcome our Barony Youth Theatre back on stage to perform a selection of scripted and devised pieces that they have been working hard on over the last few months. Please come along and support them – the next generation of performers, writers, directors and technical theatre experts. Tickets now on sale … continue reading.